Franco-American fiddler Donna Hébert has deep roots in folk music. Cited for “outstanding artistic achievement” in 2009 by Massachusetts Governor Deval Patrick, Donna is a master of fiddling and fiddle pedagogy as well as a songwriter with originals on two Smithsonian recordings.

Recently retired as fiddle instructor at Smith and Amherst Colleges in western Massachusetts, Donna now teaches a weekly Fiddling Demystified class online with fiddler George Wilson. Donna was on the faculty member of the 2019 Festival of American Fiddle Tunes, the 2019 Trad-Mad week at Pinewoods Camp, and the 2021 Virtual Strings Without Boundaries.

Donna’s book “Fiddling Demystified for Strings,” is an in-depth study of styles and techniques that “should be required reading for all string teachers hoping to branch out into fiddling,” said Laura Risk in Strings Magazine. String pioneer Darol Anger says “Donna gets it all right,” in his foreword to the book. 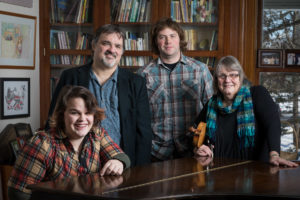 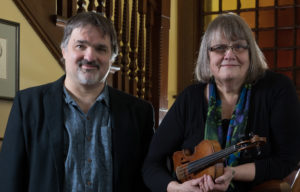 • Donna and Max perform and record together. Their “Orange on Blue” instrumental CD is available for download. They also join with good friends George Wilson and Selma Kaplan for performances of Donna and George’s celebration of “100 Years of Fiddling.”

Donna’s hands have always itched to play. Her mother removed one of the doubled strings on her own mandolin (the one in the photo) so Donna’s fingers could manage. Donna sang with her mom at performances, later sharing that activity with her own daughter, Molly Hebert-Wilson. Molly now sings with Donna in Mist Covered Mountains. Their vocal CD, This Distant Shore, was released in 2013 and they still perform together.

After sharing a high-school orchestra stand with soloist Elmar Oliveira, Donna picked up a guitar and turned left at the folk revival in the 1960s. She apprenticed as a fiddler with the Canterbury Country Dance Orchestra in the early 1970s, then for ten years, Donna and caller Tony Parkes produced the Concord Scout House contradance series with Yankee Ingenuity. Coached in authentic fiddle styles by mentors Louis Beaudoin, Gerry Robichaud, Clem Myers, Joe Cormier, Graham Townsend, Allan Block and Séamus Connolly, Donna began to tell her own story. In the 80s, Donna started the edgy Rude Girls with singer Lyn Hardy, winning a 1988 Indie for their debut Flying Fish LP, “Rude Awakening.” A co-write with Lyn, their modern murder ballad “The Ballad of Francine Hughes,” was tracked on Smithsonian’s “Folk Song America” anthology. Donna’s song, “Babies” was recorded by The Weavers’ Ronnie Gilbert on “Love Will Find a Way,” while Donna’s “Blessing” is recorded by Lui Collins and others.

In 1993, Donna met Franco-American singer Josée Vachon, bringing their shared cultural identity to the fore. With guitarist and singer Liza Constable and bassist and Cajun accordionist Alan Bradbury, they performed as Chanterelle in the U.S., Canada and France. Chanterelle released two CDs and were included on the 1999 Smithsonian anthology, “Mademoiselle, voulez-vous danser?” Their “Soirée chez nous” (1996), is in print, and Donna and Josée still meet for the occasional soirée.

Donna founded Great Groove Band youth performances at Old Songs Festival in 1998 and expanded to the Philadelphia Folk Festival in 2006. Her daughter Molly Hebert-Wilson now directs the group.  Donna has mentored eight Franco-American fiddle apprentices through the National Endowment for the Arts’ Master-Apprenticeship program and was named an Artists’ Fellow in the Folk Arts by the state of Massachusetts in 2008.